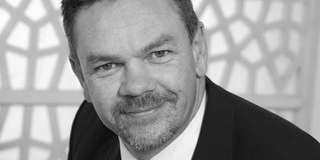 Eulian was based in the Middle East for ten years, first as the founding Managing Director of Qatar Science & Technology Park and then as Chief Executive of Dhahran Techno Valley Company. He also undertook a wide range of assignments for national governments, research institutions and commercial clients as Director of European Consulting & Management with ANGLE plc between 1998 and 2004.

Prior to which he led the development and implementation of strategies aimed at maximising the commercial opportunities arising from the resources, expertise and facilities of the Coventry University as Managing Director of Coventry University Enterprises Limited.

He relocated to Scotland in 1989, where he held two positions. Latterly as Chief Executive of Stirling University Innovation Park Limited, where he established Forthright Innovation, a trading arm of the company to assist businesses in the processes of new product development. Eulian was also a Technology Development Manager for Scottish Enterprise when he was responsible for developing and delivering a range of economic development initiatives and also obtaining an MBA. in 1985 he joined the Institute of Plant Science Research in Cambridge as a postdoctoral scientist to manage a commercially funded research project after graduation from Imperial College London with a BSc and PhD.